This will cover how to make use of all the Bollinger Band Squeeze-related scans, including:

As you may be able to tell by the names, the last four scans are subsets of the first -- the plain old Bollinger Band Squeeze Scan.  So those other four scans will have shorter lists of stocks.  We'll see why you might want to use one of those scans instead of the primary BB Squeeze scan.

What are Bollinger Bands?

The bands also clearly display when prices are in phases of high or low volatility.  Here's a chart showing the bands plus the BandWidth and %b indicators: 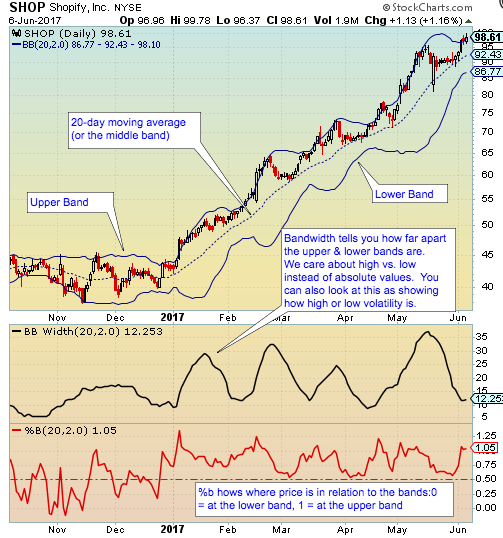 The graph of BandWidth above shows how price can cycle between periods of high & low volatility.  Those phases or cycles are what these BB Squeeze scans help us identify.  To quote John Bollinger (from his book: Bollinger on Bollinger Bands):

The Squeeze has several definitions. The simplest one is that a Squeeze is triggered when BandWidth drops to its lowest level in six months.

(That last paragraph must have been in my head when I created & named my "Calm After Storm" scan.)

SwingTradeBot's Bollinger Band Squeeze scans/signals are based off of the definition above: BandWidth must be near its lowest levels in the last 6 months.  As you'll see if you look at some of the scan results, sometimes that 6-month low doesn't result in an impressive tightening of the bands. If you don't see an obvious tightening in the bands I'd say to just skip that stock.  Here are a couple of charts showing Squeezes: 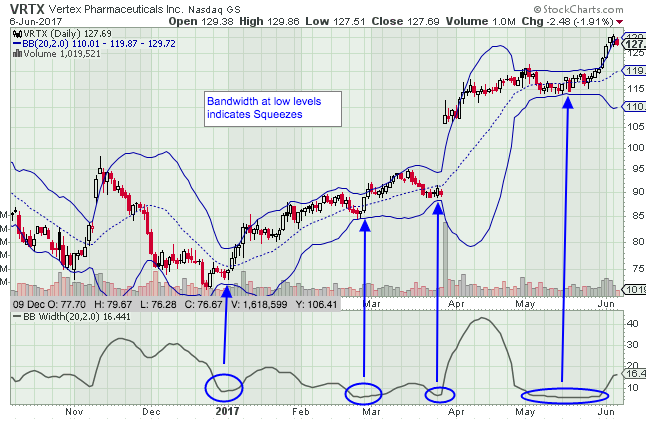 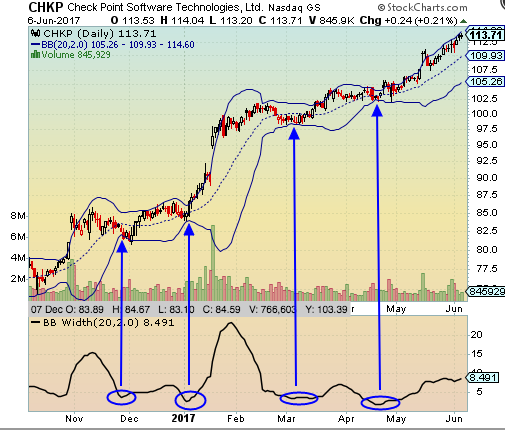 However, note that not all of those squeezes turned into big expansions in volatilty.  There are no guarantees of what will happen once a Squeeze ends! A Squeeze in & of itself will not predict direction of the move out of the consolidation zone.  Nor does it guarantee high volatility is coming.  Volatitlity could simply gradually increase.

Using the Squeeze as a Trade Setup

A Squeeze is simply a precondition for a possible volatility breakout.  John Bollinger has laid out some simple steps for trading based on a Squeeze:

Perhaps the simplest thing to do is place a buy stop above (or a sell-short stop below) a price consolidation zone of a stock in a Squeeze.  As mentioned above, though, you may encounter some headfakes.  Mr. Bollinger suggests using volume indicators to help forecast the true direction of a breakout/breakdown.

Combining with Other Scans

Here are some ideas for other scans you could pair with the Bollinger Band Squeeze scans in a Combo Scan: