You may notice today that you're seeing more alerts listed for a stock than before.  That's because I've made a pretty significant change to some things behind the scenes.  By sort of an accident of evolution (let's call it), there have always been two classes of alerts (scans / signals) on the site.  Old timers will remember that they were listed separately. They used to be called "Individual Pattern Scans" and "Advanced Scans".

The difference between those two categories of scans was largely aftificial.  When I dreamed up the site I first thought of making alerts for things like candlestick patterns, Bollinger Band Squeezes or Cup & Handle patterns.  Those are things which (as far as I knew) needed to be processed / calculated and then stored in order to be queried quickly & efficiently.

Later I wanted the system to tell me other things, like which stocks have risen 5 days in a row or have made an Inside Day, etc.  I realized with some of those I could have my database tell me the answer "on the fly" -- so I didn't have to pre-calculate them and store them.

So that led me to put certain slerts in one of those two classes.  However, there was another difference.  The ones that tended to need that pre-calculation were, in my mind, more critical or primary signals.  It's those signals which would appear in the "alerts" listings on each stock's main page and in watchlists and portfolios.  As time went on though, I realized that the primary / secondary distinction wasn't accurate in all situations.

This is where the change comes in -- as of yesterday, you'll now see signals from both categories displayed in those alerts listings.  (There are some which still won't be displayed though.  See the list below.)  For example, in the photo below the alerts with red arrows would not have appeared there before this change. 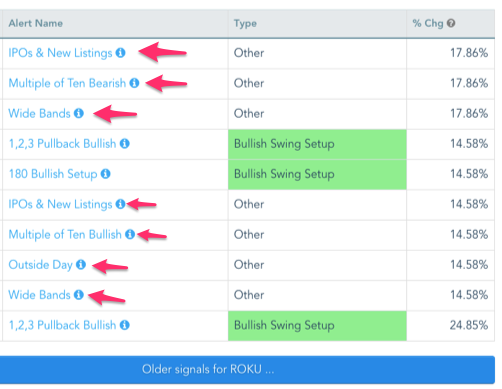 So before today, the only way to know if a stock made an outside day was to go to the outside day scan and see if it appeared in the scan results.  Now you'll see "Outside Day" in more places.  As of today this change is only in effect on the main stock pages and the "older signals for" (alert history) pages.  Some time this week that change will also take effect on the watchlists and portfolios.

I've wanterd to make this change for a long time but some recent conversations I've had made me push this to the front of my to-do list.  Over the last couple of weeks I've had a few people ask me (and this never happened before) "why didn't you process XYZ today... I don't see any alerts for today".  I'd tell them that it was processed and that not every stock does something alert worthy every day.  So this change is partially a response to those questions/complaints.  The system did "know interesting things" that were hidden - unless you ran one of those "on the fly" scans..

However, I've always been concerned about information overload and this change certainly borders on exactly that.  So I'm also going to allow people to configure which signals appear in their watchlists and portfolios.  So if you don't care about the "Down 5 Days in a Row" alert, you can turn it off.

Note that the "on the fly" signals still will not be counted in scans such as "Most Alerts", "Most Bullish Alerts" and "Most Bearish Alerts".

In case you're wondering, here are all *new* alerts which you'll see:

These are the others which will not be displayed (you'll have to run the scans to see matchig stocks):

And here are the ones which have always been displayed: