I'm going to try to do a post like this at least every other week.  My goal here is to show a bit of my process and the scans I use to find these trading candidates.  They certainly won't be the best trades one could have possibly made, it will just highlight those I found and chose to take.

First up is CENX.  This stock has been on my watchlist for a few weeks because I traded it in December.  I bought above that consolidation pattern at  $16.14 (with a stop loss under that rectangle at 15.30 -- a great example of a classic Darvis Box or a flag) and sold it on December 28th at 19.82.  So my initial risk (1R) (read more about R and R multiples here) was 84 cents per share, so I made 4.4 times my initial risk (4R).  I liked how the stock was acting, so I kept an eye on it by adding it to one of my watchlists. 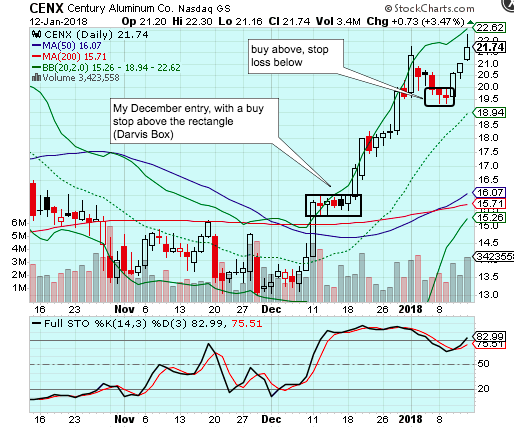 CENX popped up on the Top 50 Bullish scan on January 9th.  So that immediately got my attention.  Then I saw that it made both the Non-ADX Pullback and the 1,2,3, Bullish Pullback pattern as well an NR7 & an NR7-2 on the 9th.  Either of those pullback patterns in combination with an NR7 is something I love to see, so I knew I had to take a swing at CENX the next day.  I entered via my usual buy-stop order and just waited for it to trigger.  As you can see in the chart I got in on the 10th and I remain in the position wth a trailing stop. I currently have about an 8% gain (just under 2R) after 3 days in CENX.

MNTA was the other standout for me last week.  I wrote the Calm After Storm scan specifically to catch this type of action -- a big pop followed by a pullback and a narrowing of the daily range and ideally a reversal candlestick. 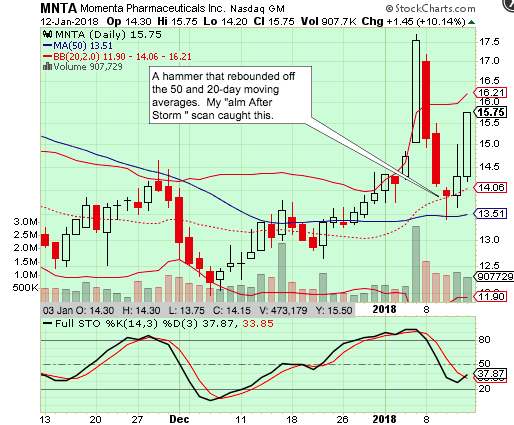 MNTA showed up on the "Most Bullish Alerts" scan on the 10th thanks to it making 50 DMA Support, Hammer Candlestick, Non-ADX 1,2,3,4 Bullish, and Calm After Storm.  Again, I used my typical order to get in - a buy stop above the day's range on the 10th.  I went with a 80 cent stop loss, so I'm currently sitting on approximately a 2R gain (13%) after 2 days.