How SwingTradeBot Helped Me Have a Great Trading Week

I had a couple of really nice trades this week that I want to discuss.  I half-jokingly tweeted about the first one, chalking it up to dumb luck.  While there was certainly some luck involved, I'm reminded of that old saying about luck:

Luck is what happens when preparation meets opportunity...

Lucky people generate their own good fortune via four basic principles. They are skilled at creating and noticing chance opportunities, make lucky decisions by listening to their intuition, create self-fulfilling prophesies via positive expectations, and adopt a resilient attitude that transforms bad luck into good.

I think that was the case with both of these trades. 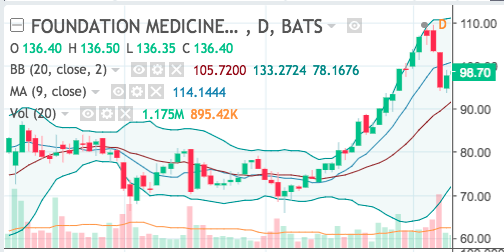 I've written about why I like these type of setups a million times in the blog and my notes.  A clear, strong uptrend (complete with a Bollinger Band Walk), which has a short-term pullback.  The relatively small candlestick on the 8th gave me a clear entry and exit (stop-loss) point.  So I put in an order to buy it above 99, with a stop below 93.70.  My initial profit target was the high on June 5th of 108.65 -- so it was about a 2-for-1 reward-to-risk ratio.

As you can see on the chart below, it just drifted higher over the next several sessions.  It had almost reached my initial profit target... 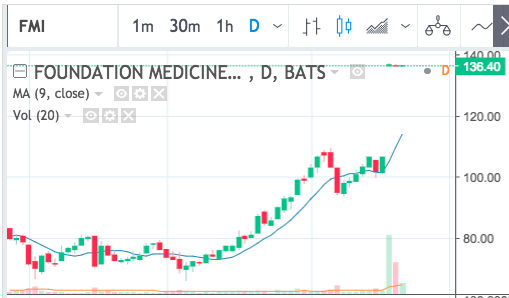 But then on the morning of the 19th, FMI got acquired for a 28% premium.  That was certainly lucky for me but at the same time, I knew this stock had that potential because, as usual, before buying it, I looked into the reason(s) for its recent strong uptrend.  I saw a healthcare / biotech company with some recent good news.  I know from experience that those kind of companies often get acquired. While I wasn't counting on that to happen, I knew it was a possibility. 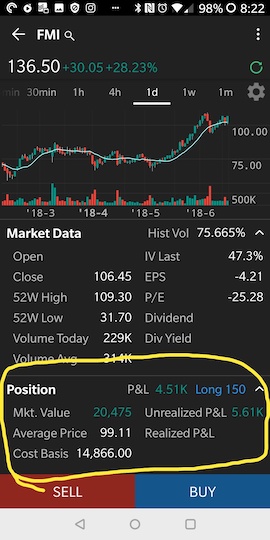 The second trade happened today, with AVLR.  It started when a buddy of mine sent me the following text message (at 10:18) about Wayfair (W), which was selling off hard: 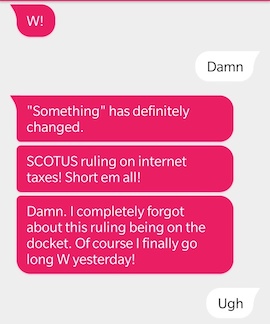 I checked several other e-commerce stocks which were also getting slammed.  Then I wondered who might benefit from the Supreme Court decision...

That got me thinking that there was a recent IPO which plays in that e-commerce tax reporting space.  I've mentioned several times on the site that I love trading IPOs.  It's part of my daily routine to see which companies have IPOed and to track their movements.  I also have a watchlist dedicated to IPOs, which I reveiw daily.  So I know that some of the IPOs, especially the SaaS ones, have been on fire of late. So all that (preparation) led me to (at 10:25): 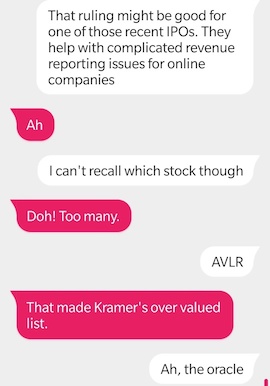 After some quick research, I found the stock, AVLR.  I checked its intraday chart and saw that it had actually sold off and started bouncing back.  I bought it at 10:28 at $42.99 -- my initial stop was at the low of the day ($40.63). Here's the intraday chart (5 minutes bars/candles): 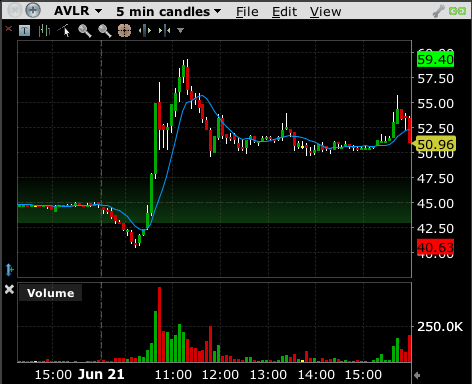 More of our conversation: 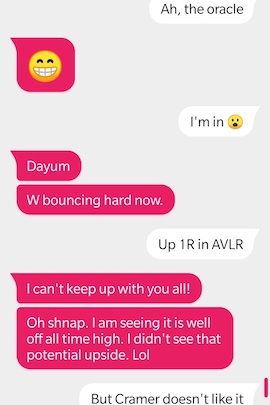 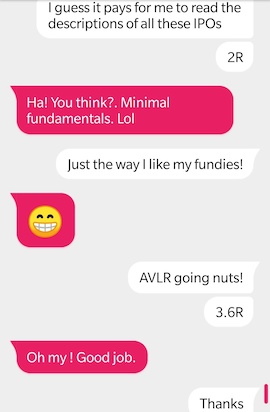 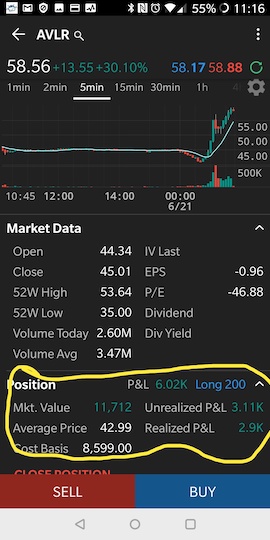 I'm still holding on to the other half of the original position.

So this to me was a great example of why I built SwingTradeBot (for myself).  My routine (There's a reason I both built the routines functionality and put a link to the Recent IPOs page as a default routine item for every user of the site.) keeps me abreast of where the action is (SaaS/Cloud stocks and IPOs) as well enabling me to learn about and track recent IPOs.  When I couldn't recall which recent IPO I thought might benefit from that Supreme Court ruling, I simply went to the Recent IPO page and within a minute I'd found it.

My usage of SwingTradeBot certainly helped me to create some "luck" by helping to keep me prepared and informed.