I added a few new scans to the site last night.  They are:

I've only been using these scans for a few days but so far my favorite is the "Strong, Oversold, Upside Reversal" scan.  A textbook example of the type of action that scan is meant to catch is what JOY did on May 6th: 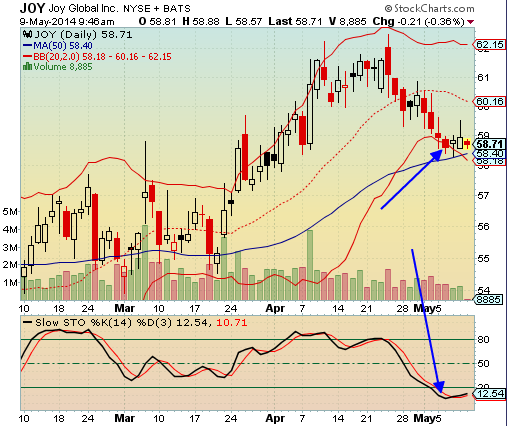 As you can see it hit oversold territory (based on stochastic) in early May.  The candle that I've highlighted is an NR7 (narrowest range in the last seven sessions), which *can be* a reversal signal.  So it triggered in the scn based on those two things.  I also like that it's pulled back in a somehat orderly fashion and was perched just above its 50-day moving average and that it was right at its lower Bollinger Band.  So JOY would go on my buy list with an entry just above the May 6th high.

The "Strong, Oversold" scan is less likely to find immediate buy setups.  That's a scan that I run to find things to add to my watchlist.  Those stocks are worth tracking for a few days to see if they present good setups.

The two "weak, overbought" scans do just the opposite of what I've described for the "strong, oversold" scans.  These are meant to help find shorting candidates in my mind but perhaps others may find them useful for other strategies.

These scans can be accessed via the top navigation menu.  They're under "Research / Pre-Defined Scans".  Look for more scans and other features soon...