How Bollinger Bands (and Stochastic) Helped Navigate the Market in 2018

I meant to write this over the weekend when I was going through charts and noticed how the S&P 500 has been bouncing between its upper and lower Bollinger Bands since February.  So here's the chart, which I've annotated to identify some key turning points (you can click the chart to get a larger version): 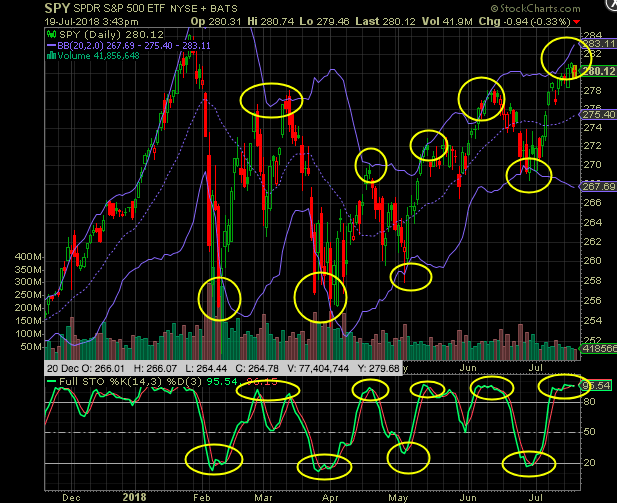 Bollinger Bands and Stochastic are some of my favorite indicators -- I feel a little lost if I see a chart without those indicators displayed.

The bands *can* also act as support and resistance.  That's more often the case if those lines are essentially flat.  If & when the upper band starts sloping up that can be a sign of opening up to allow price to keep rising. AKA, an upper Bollinger Band Walk.  The opposite is true for the lower band.

Combining these indicators can be quite revealing.  The S&P chart shows a strong Upper Band Walk from late 2107 through January 2018.  The it falls hard.  So hard that it made the lower band roll over and slope downward sharply.  Note that it finally bounced when stochastic reached oversold.  (Also note the value of my favorite oversold indicator around that time -- the % of stocks above their 50-day moving averages was giving a strong sell signal then.)

From there you can see all the areas I circled and how they correspond to turning points.  Upper band touches or approaches (especailly with flattish a flat(ish) line) with overbought stochatic is a decent warning sign.  You may not want to outright sell but maybe you use those junctures as a sign to tighten your stops, take partial profits, hedge, etc.

The opposite is true with lower band touches and oversold stochastic levels.

I'm curious to see how the current situation plays out.  Late last week the upper band was basically flat and the S&P was NOT trending and that had me tightening stops and taking some profits.  Right now the upper band is rising.  That makes me a bit more optimistic about whether the market can push higher without  first going through a pullback or conslidation period.

As I always say, there's no magic indicator or set of indicators but these have served me well over the years.  Of course, you can use SwingTradeBot to scan for various Bolling Band & Stochastic junctures.  (See the Bollinger Band scans & the stochastic scans) You can also blend them them via a Combo Scan.

P.S. If you want to learn more about Bollinger Bands I recommend John Bollinger's book.  It's listed in my Recommended Trading Books page.