Back in October, while at Stocktoberfest, I attended a talk by Chris Kimble of Kimble Charting Solutions titled "How to Capitalize on the Technimentals" It was about "how investors can benefit from combining the power of the pattern along with sentiment and fundamentals." As part of that discussion Chris covered a trade he had recently initiated. He got long XIV, the inverse VIX ETN during the mid-October selloff. (He now has a follow-up blog post showing how the trade played out -- looks like he made about a %40 profit in less than 4 weeks). I was really impressed with that strategy, which was basically a bet that volatility would return to its recent norm (mean reversion).

Since then I've been watching the VIX and XIV closely, waiting for a chance to put on a similar trade. As you know, volatility has been spiking of late largely thanks to the slide in the price of oil. So I've been studying the charts of the volatility instruments this week and I noticed something really interesting -- it seems that there are pretty good signals to not only short volatility but also to get long it. If you've spent any time at all on this site you'll notice a lot of mentions of Bollinger Bands and NR7 bars / candles. I use both of those to capitalize on the fact that low volatility begets high volatility (and high begets low). In other words, I'm always on the lookout for prices to swing from periods of range contraction to range expansion.

Bollinger Bands are driven by volatility, and The Squeeze is a pure reflection of that volatility. When volatility falls to historically low levels, The Squeeze is on. An indicator called Bandwidth was created in order to measure The Squeeze. Bandwidth depicts volatility as a function of the average. As such it is comparable from security to security, across time, and across markets. As we have seen earlier, volatility is highly variable over time. It is precisely this variability that is the key to The Squeeze. The Squeeze has several definitions. The simplest one -- one that will do admirably for our purposes-is that a Squeeze is triggered when Bandwidth drops to its lowest level in six months.

and one more important note about head fakes:

So with all of that in mind, here's what I noticed about these long and short VIX instruments. It seems that once a squeeze begins on the long or short instruments that's a good signal to get long volatility. Here's a chart of the last several months of XIV: 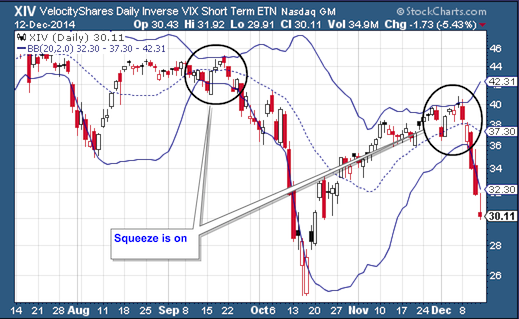 Notice that in both October and December we got head fakes (attempts to push through the upper band) before the true move to the downside began. You can see the Bollinger Band Squeeze alerts on the SwingTradeBot XIV recent alerts page: 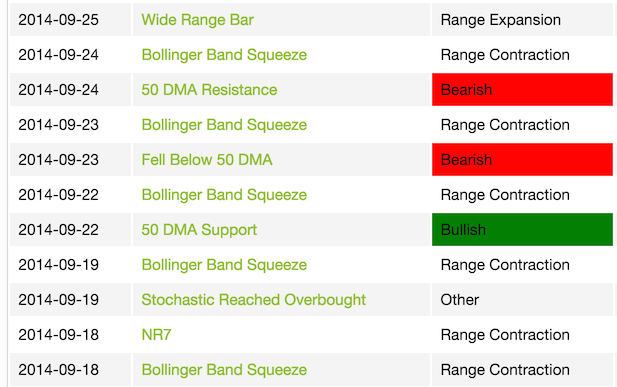 You'll see similar moves and alerts for the long VIX instruments but the band touches and moves will be opposite what we saw on XIV. Here's the VXX chart for the same period, where the head fakes are touches of the lower Bollinger Band before reversing to blast through the upper band: 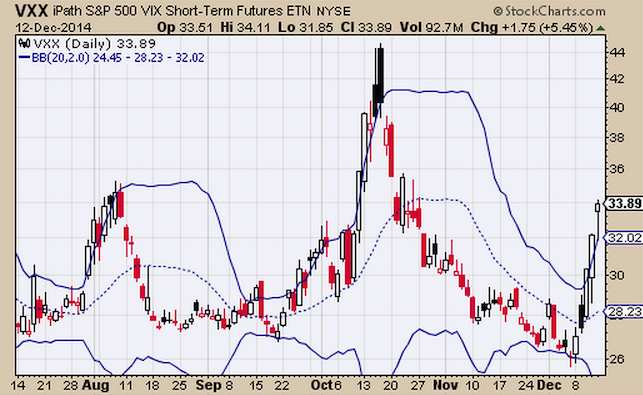 The squeezes don't tell us the direction of the coming expansion but you can use indicators, experience and what the broad market is doing to make educated guesses about the direction. It seems that since we're tracking volatility of volatility that odds are high that a squeeze will result in an upside move for the long instruments ($VXX, $UVXY, $TVIX, $VIXY, $VXZ) and a downside move for the short instruments ($XIV, $SVXY).

I'll be continuing to study using the Bollinger Bands on the VIX as trade signals. I actually bought some XIV yesterday because it was so far below its lower band. My exit target is the middle band / 20-day moving average. I didn't discover the squeeze as a signal to get long volatility until after this current spike was underway but I'll be tracking the bands in order to catch the next cycle.