Here's a great blog post by @SmashTheBid detailing his trading last month.  It does a great job of illustrating some things I've been harping on for well over a decade.  Namely:

I was shocked to see the news that Google just revamped Google Finance and dropped their portfolio tracking tool.  I see on Twitter that a lot of people are looking for a replacement portfolio tracker.  Well I have a great solution for those folks -- SwingTradeBot's portfolios!

The other day somebody asked me if there was a way to run a scan and only see results from his watchlists.  There was not, but after discussing it for a while I saw how it could be useful to those who like to trade from a specific set of stocks.

So I've now added the ability to run scans against just the stocks which are in your watchlists and portfolios.  Just check the box next to "Only My Stocks" in the form where you enter your scan criteria.

I have some good news for the many people who have asked me for a market cap scan filter.  As of today you can finally filter by that piece of fundamental data,  You'll see a couple of new parameters in the form where you enter your scan criteria.  Those news parameters allow you to choose values for a minimum and a maximum market cap.

I recently added some data which may be helpful in getting a feel for what scans are "trending".  I've started tracking the number of stocks which appear on each scan each day.  That's enabled the ability to show how much above or below normal a scan is on any given day.  You can find this data in two places.

Over the last few weeks a few people have asked me if there is a way to differentiate new 52-week intraday highs from closing highs.  The "new highs & lows" scans I've had on the site for years were simply alerting to intraday extremes.  So I've decided to create a couple of new scans:

The original scans are still here but I've made these new signals/scans replace the old ones with regard to how the system treats them.  For example, I used to count a stock making a new 52-week intraday high as a bullish signal.  That always bothered me a bit because that same stock could have opened at a new high and sold off horrendously during the day.  In a situation like that, the site would still be showing that new high as bullish.  Well that won't happen anymore.  I've changed the new intraday highs & lows to be neutral signals and the new ones will count as bullish or bearish. Hopefully you'll find these new ones useful.

Streamlined Adding of Stocks to Portfolios

I just made it a little easier to add stocks to portfolio lists in the app.  Before you were required to enter the number of shares and the entry price.  Those values are still required but they now get automatically set to default values (100 shares & the average price from the latest full trading day).  So now you can just click the "Add to Portfolio" button without making any other adjustments.

This should come in handy for those who don't particularly want to track actual P&L within SwingTradeBot but, instead, want to track more stocks in order to get alerts/signals on them.  This makes it easier to use a portfolio as an additional watchlist. 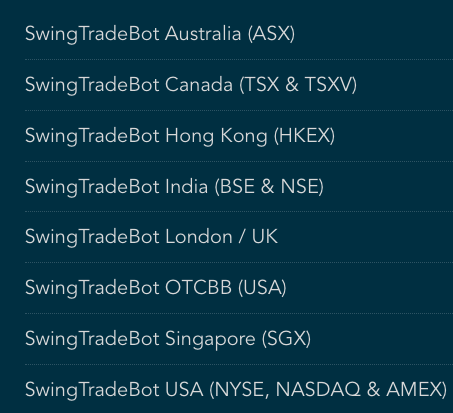 Shortly after SwingTradeBot went live (with coverage of US listed stocks -- NYSE, Nasdaq & AMEX) a few years ago people started asking me if I could add coverage of various foreign (to me) markets.  My answer was always "yes, I just need a data source for those markets".  I also needed to make some changes to the "engine" to make it a bit more generic and to be capable of hadling other markets.

Well I've been tweaking things over the last few months and I'm happy to announce the launch of seven more sites covering the following markets:

I'm sharing an email exchange I had earlier today in hopes that it will help others to find ways to get exactly what they want when using the site to scan for stocks.  A friend sent me this:

I was looking through your hammer scans on SwingTradeBot to see how Zillow stacked up on the grading curve. I was surprised Zillow (Z) only got a B. I looked at the A rated puppies and felt like Zillow (Z) should be higher rated. Then I realized what I really want is a modified hammer scan. I want hammers that come at the end of a period of selling, even better if it is an oversold hammer or a hammer coming off a high. The preceding selling has to be at least three straight down days. Did you already read my mind and create such a thing, or do I need to put a suggestion in the idea box? :)

This will cover how to make use of all the Bollinger Band Squeeze-related scans, including:

As you may be able to tell by the names, the last four scans are subsets of the first -- the plain old Bollinger Band Squeeze Scan.  So those other four scans will have shorter lists of stocks.  We'll see why you might want to use one of those scans instead of the primary BB Squeeze scan.